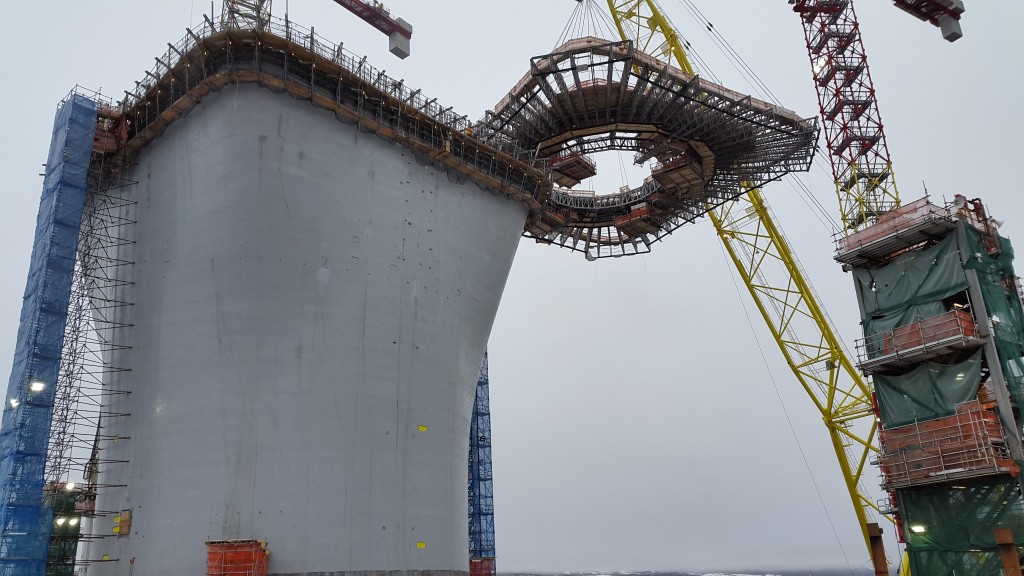 Newfoundland, Canada. The main shaft of the platform was finished on December 22, 2015 and completed in under four weeks. The shaft is 153 ft / 47 m tall and has a base diameter of 115 ft / 35 m. To slipform the variable cross-section, a 200 ton truss system was required to guide the forms as they climbed upwards. The slipform system and construction supervision were supplied by Gleitbau GmbH, the leading slipform company in the world today. Slipforming operations continued around the clock to complete this very demanding project in record time and also under severe winter conditions.

The surface finish and concrete color came out exceptionally uniformly, as can be seen in the picture above. Hydraulic jacks were used to raise the form system every few minutes, by a few millimeters at a time. The jacks were attached to special climbing rods which were embedded in the concrete wall. Vertical lasers guided the slipform system as it moved upwards to construct the shaft. The custom-designed truss system that guided the forms transversely was also used as a work platform and storage area for rebar and post-tensioning materials. About 3000 tons of post-tensioning was installed in total in the concrete substructure.

Lower platforms suspended from the truss system were used for concrete finishing work. A third platform below the finishing platform provided a work area for survey activities as part of the geometry control operations. The platforms and flooring had to be re-worked repeatedly as the concrete walls  moved within the footprint of the truss system. This made for great logistical challenges as the steady supply of materials to the work point had to be maintained at all times. 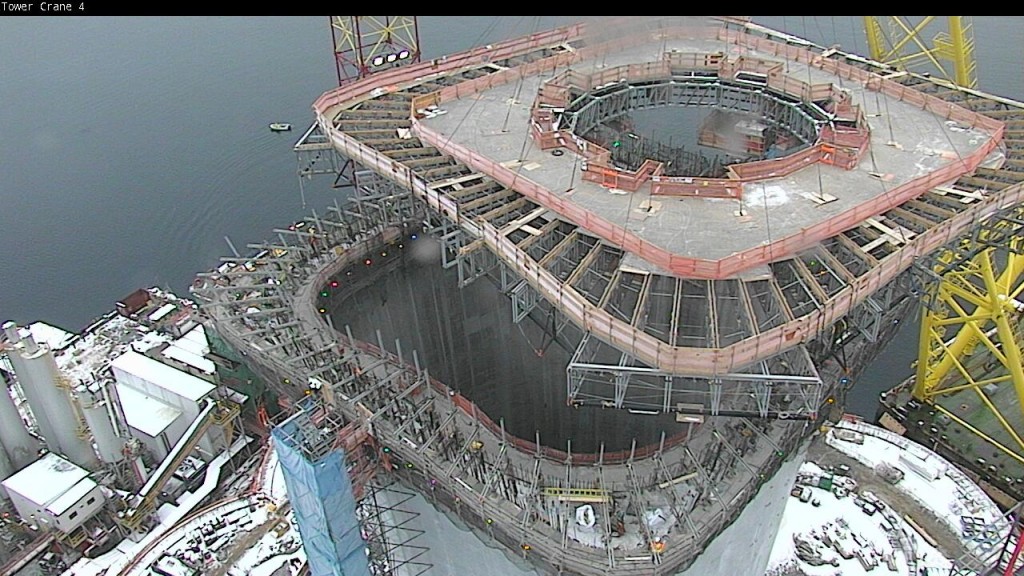 Newfoundland, Canada. As the year draws to a close, the KKC project team is making preparations for slipforming the main shaft of the Hebron GBS. This 35 m diameter shaft varies in cross-section from round at the bottom to approximately square on top. Thus, a highly specialized slipform system is required. Key to this system is the radial truss assembly seen below. It allows the slipform yokes and forms to move transversely as they glide upwards. The final result is the unique shape of the main shaft. This shape minimizes the drag below the waterline, but also offers a solid, square support on top, for the platform superstructure. 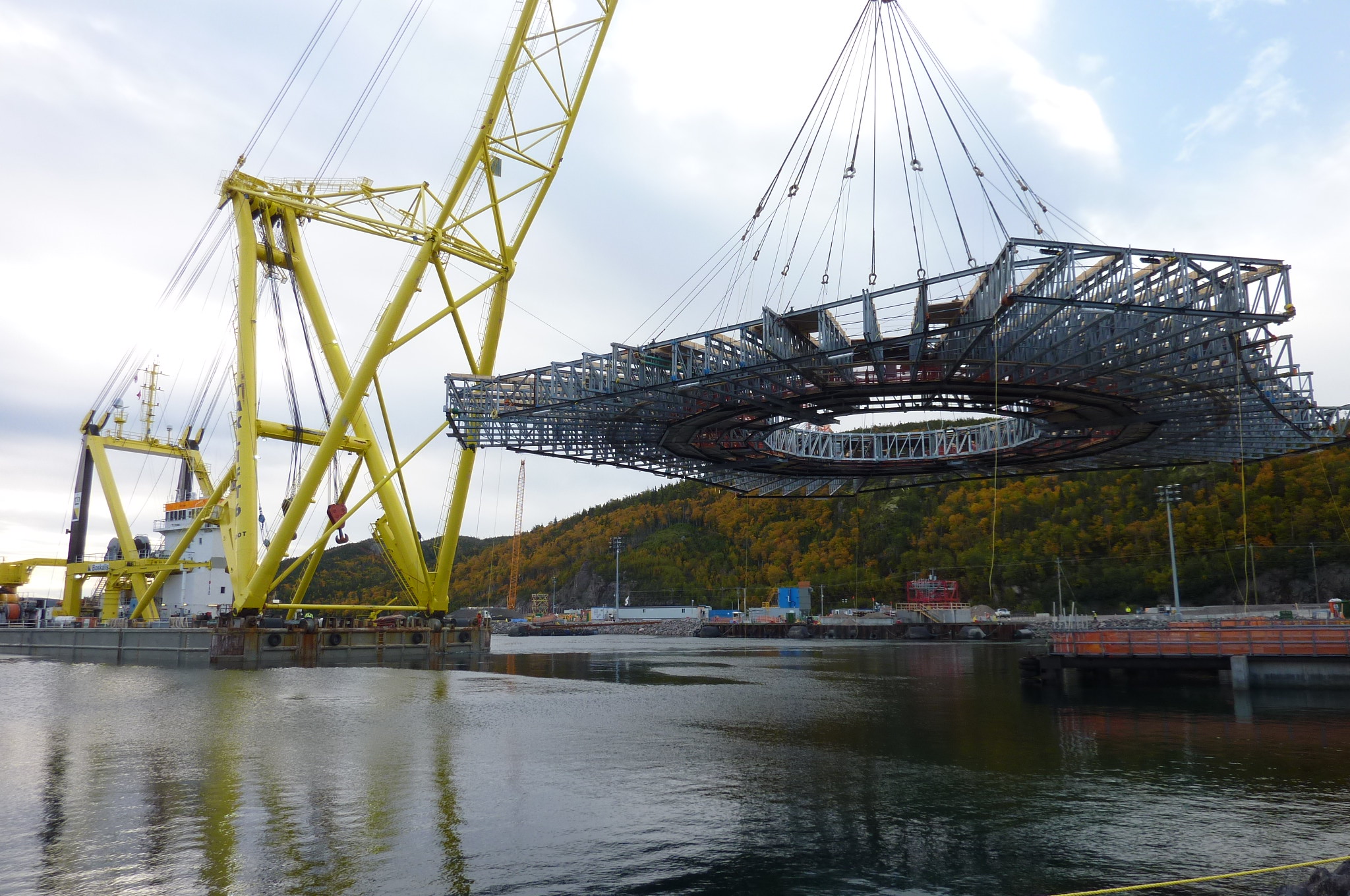 The 200 ton slipform truss system being prepared for main shaft construction on the Hebron GBS. 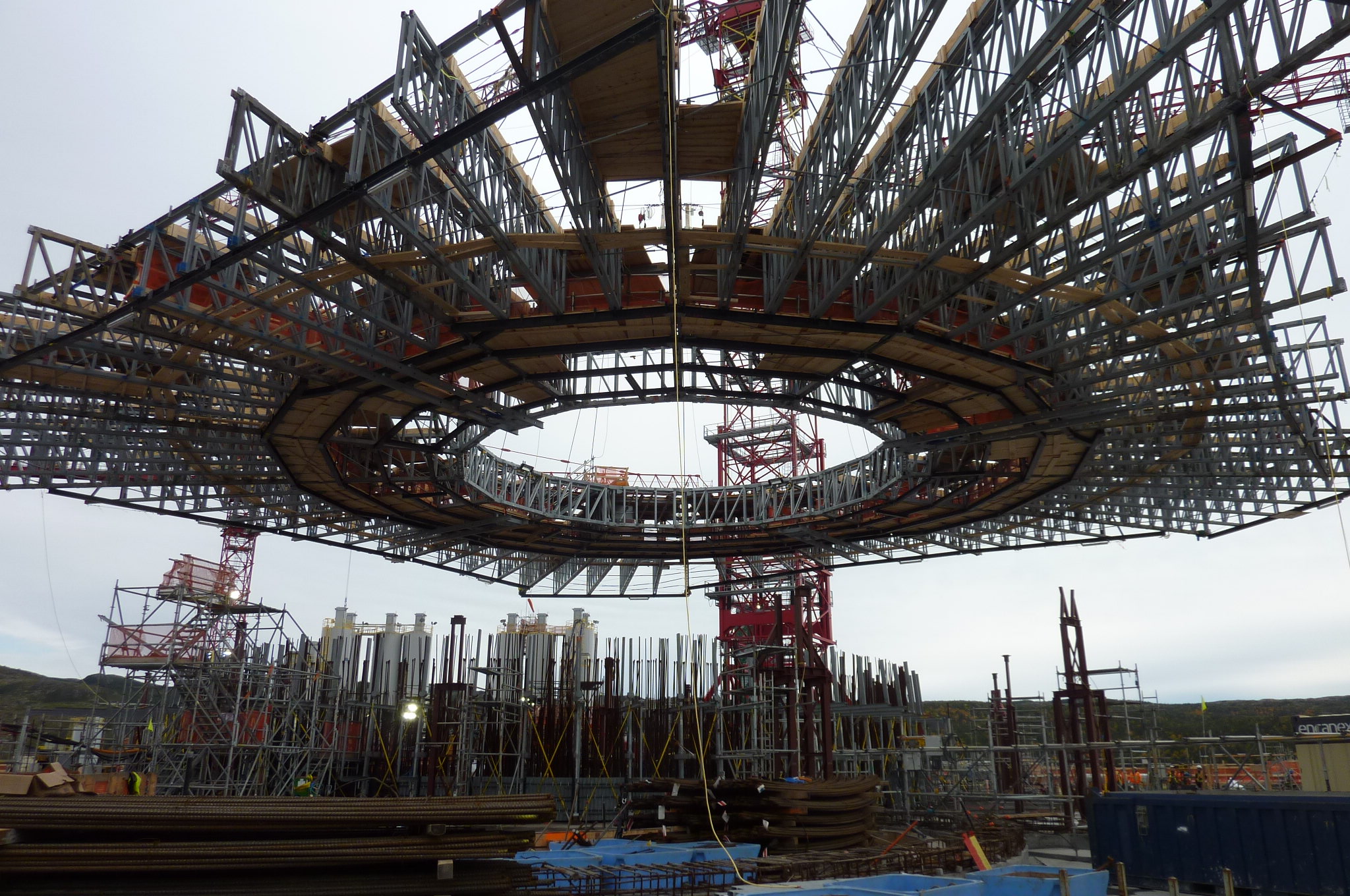 The slipform truss system being lowered onto temporary supports on top of the crude oil storage tanks in preparation for slipforming the main shaft, which varies in cross-section from round to square.

Slipforming such variable cross-sections represents a quantum leap in slipform technology. This technology was developed by Gleitbau GmbH, the only company in the world currently offering this capability. These systems are extensively engineered, as the truss assembly can weigh up to 200 tons.

Computer model of the truss system for the crane lifting condition.

The Hebron oil field off Newfoundland and Labrador, Canada, will be developed using a stand-alone concrete gravity based structure (GBS). This GBS oil platform is built out of steel-reinforced, post-tensioned concrete using the slipforming method of construction. It is designed to withstand sea ice, icebergs, storms and offshore waves. Kiewit-Kvaerner Contractors, an equal partnership between Peter Kiewit Infrastructure Co. and Kvaerner Canada Ltd. has been awarded a contract by ExxonMobil Canada for building this GBS. The contract is for the GBS design, procurement, construction and installation in approximately 93 m water depth. 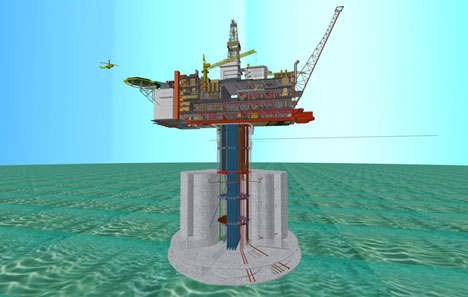 Below, the lower part of the GBS has left the dry dock and slipform work is progressing on the crude oil storage tanks. The slipforming of the 35 m diameter main shaft will start towards the end of 2015. 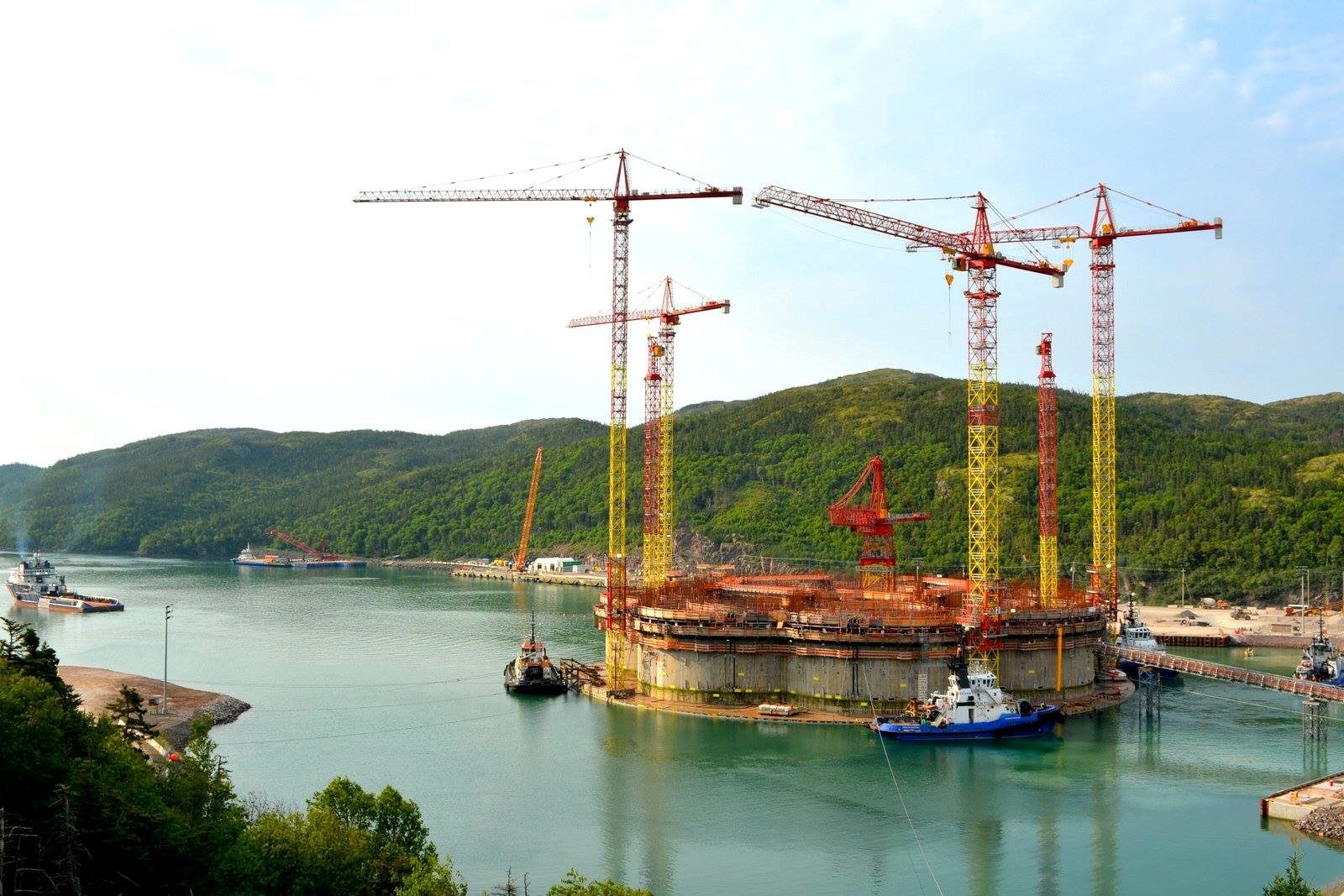